Fuliwen is not a pen brand I'm overly familiar with. It's been covered in Frank Underwater's blog and this particular pen, dubbed the Sceptre, has been reviewed by chrisrap52, WaskiSquirrel and Aaron's Pen Videos on YouTube.

I didn't pay much attention to the Fuliwen 016 when it was released last year. Frankly, I haven't been that adventurous in seeking out pens in more unusual colors. But I was reminded recently that this is faceted pen and that renewed my interest. I decided to jump - and go the full Monty - and ordered the Koi version. The pen was just over US$18 plus shipping on Taobao.

Here's what I got. From other reviewers it seems sometimes different things come in the box. I have also noticed that the nib unit with my pen is different from others. It extends further from the section so the pen is presumably a little longer.

The Fuliwen 016 has much to like. First and foremost, it's big enough to write with unposted. And it posts very well. Better than the Moonman M100 by a good margin and better even than the Moonman N3. It posts securely, no wobble at all.

For a slim pen, it feels great in the hand. Everything is smooth. The edges of the facets are rounded to the point that they are easy to miss.  The section is long and the metal threads above the section are not sharp in the least.

This is a pen that's easy to grip just about anywhere. It has a refined, welcoming feel in the hand.

Subtle as they are, I do really like the facets. They add a sophisticated touch. The six sides gradually taper to round from the ends. Where the cap meets the barrel the pen is round. While this avoids alignment problems, it also means that the pen still actually rolls on flat surfaces! Oh well. 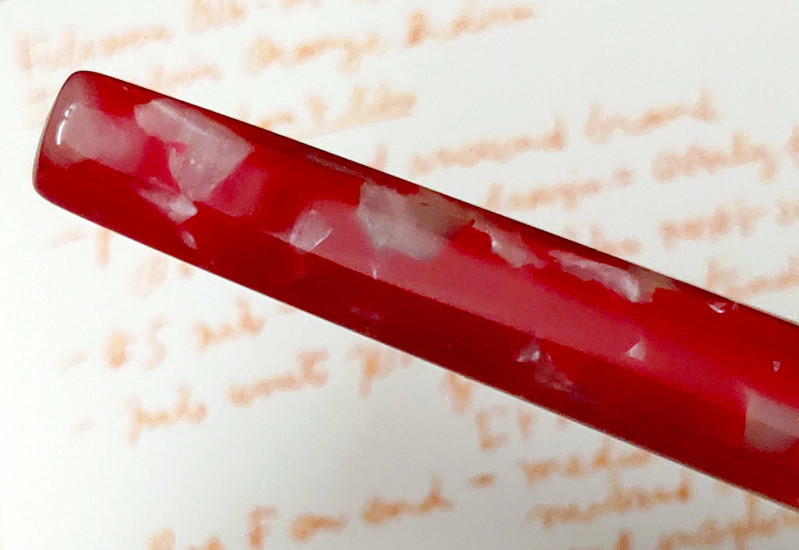 Like the Moonman N3, the cap features a metal emblem with the Fuliwen F logo. From a design perspective I find it a little lacking. It's the biggest miss on the pen. 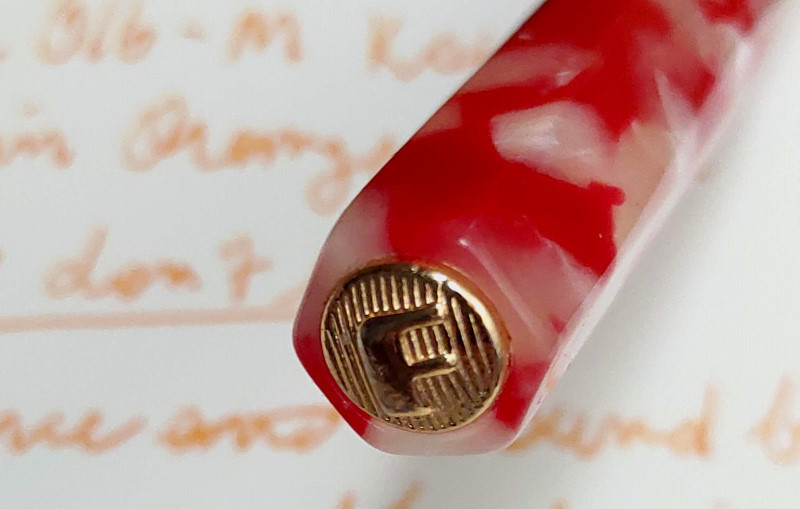 Overall the construction and finishing of the pen is top notch.  The cap is thin and comes off in under 1½ turns. The metal threads on the section and barrel are perfect. 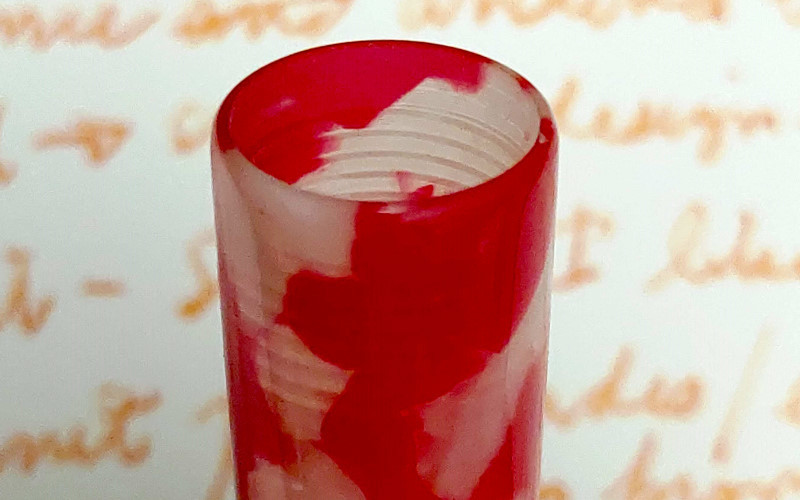 The converter works smoothly and doesn't rattle in the barrel.

Somewhat unusually, the pen is offered with a M nib. That's what I chose.

I filled the pen with J. Herbin Orange Indien - my only orange ink - but also one of my most difficult. It lived up to its reputation and was, well, difficult. Stingy flow and a less than satisfying line.

So I went to tinker with the nib. With a little work, I was able to extract the nib and feed out of the nib unit without breaking anything. Always a good sign. I flossed the nib, gave everything a good clean and refit the nib. The pen was only marginally better.

So I changed inks, abandoning any pretense of matching the ink to the pen, and filled it with Noodlers Air Corps Blue Black. Bingo. The pen became a wet and generous M. 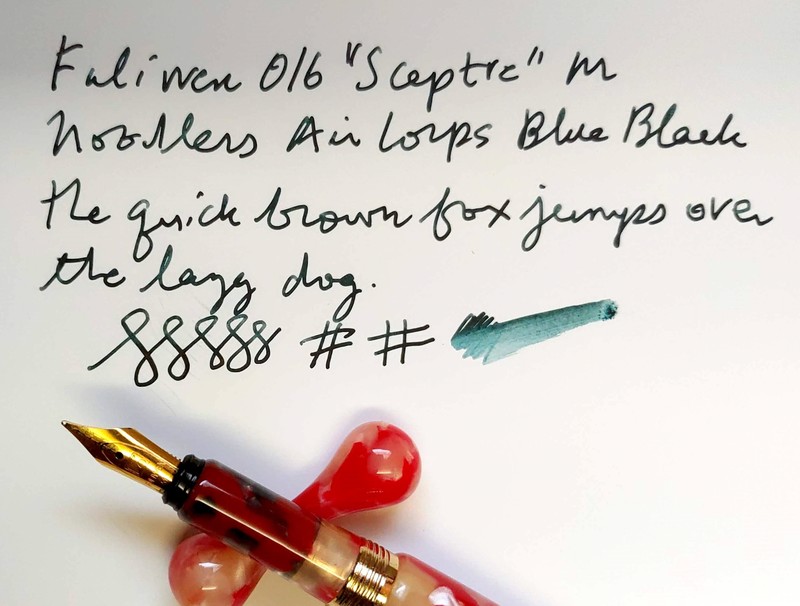 That prompted me to engage in some ink research and a trip to the pen store. I picked Diamine Vermillion as the kind of red-orange I wanted to try. Another bingo! This is a match I can live with. 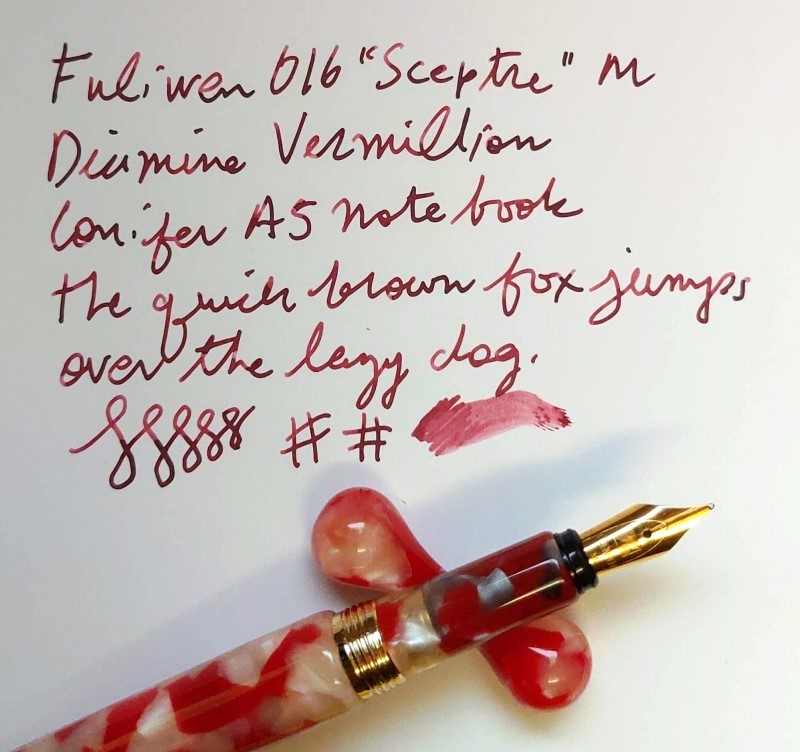 Over the past couple of weeks, I've come to regard the Fuliwen 016 as a near perfect example of a slim pen. It is extremely comfortable in the hand and writes equally well posted and posted. I love how securely it posts. The lack of a clip is of no matter. Maybe even a plus.

I've never had a hard start and, once I found a friendly ink, it writes like a champ. (I can't say whether my tinkering with the nib made things better but figure it did.) The nib unit comes apart easily for cleaning and goes back together in just one way, making it a snap to reassemble the same way each time.

It takes standard international converters so you can go between colors even faster. To my pleasant surprise, a Moonman #5 nib unit swaps in perfectly. Fitting a different #5 nib should also be no problem, though I haven't tried that yet.

Despite all it has going for it, the pen does feel a little like a throwback. Part of that is the materials. As much as I have come to grok the koi color, for me it somehow points backwards rather than forwards. Part of it, I think, is the gold trim. The big Fuliwen "F" on the finial tells me this company is on the way to a re-brand but hasn't quite gotten there yet. Given the semi-transparent nature of the acrylic, it would be nice if Fuliwen used a transparent nib unit. It would make the business end of the more consistent with the larger feel of the pen.

I could definitely see this pen in solid glossy black or some bright colors.

But, all-in-all, I'm in. The Fuliwen 016 Sceptre passes with near full marks. I'd recommend it to anyone looking for a slim pen.

Nice review.  I'd consider this a pocket pen.  Some times the design elements of Chinese pens don't seem to fit with the overall design.  Could be trying to use existing bits or maybe accommodating manufacturing limits or to meet a price point.  Overall I am very happy with the great variety of models we can write with.  Quality definitely getting better.


More from this author
Natami Inception - The Start of Something Beaut...

The PenBBS 308 is a pen designed by fountain pen lovers. People who know their stuff. For me, it's an instant classic. 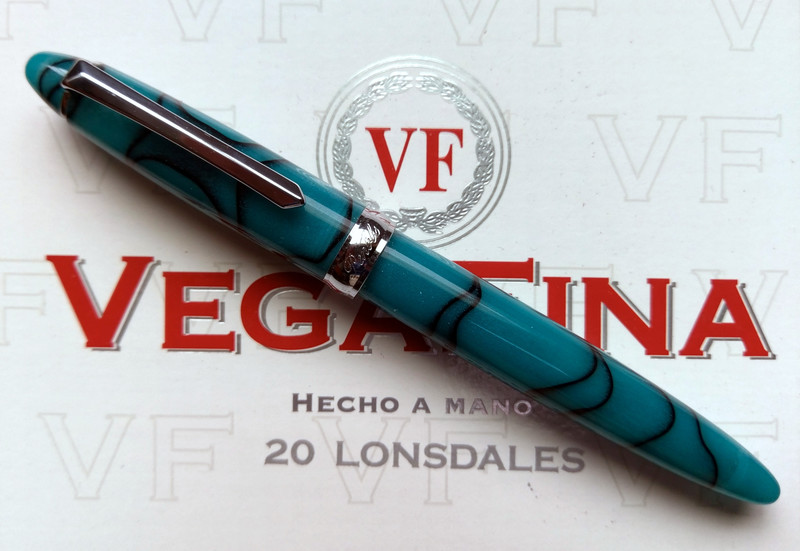 Trump in a Skirt

Taylor Swift has turned into Donald Trump.
Ah, shit. It's only entertainment and very finely constructed, but listen to what she has to say.
I Did Something Bad 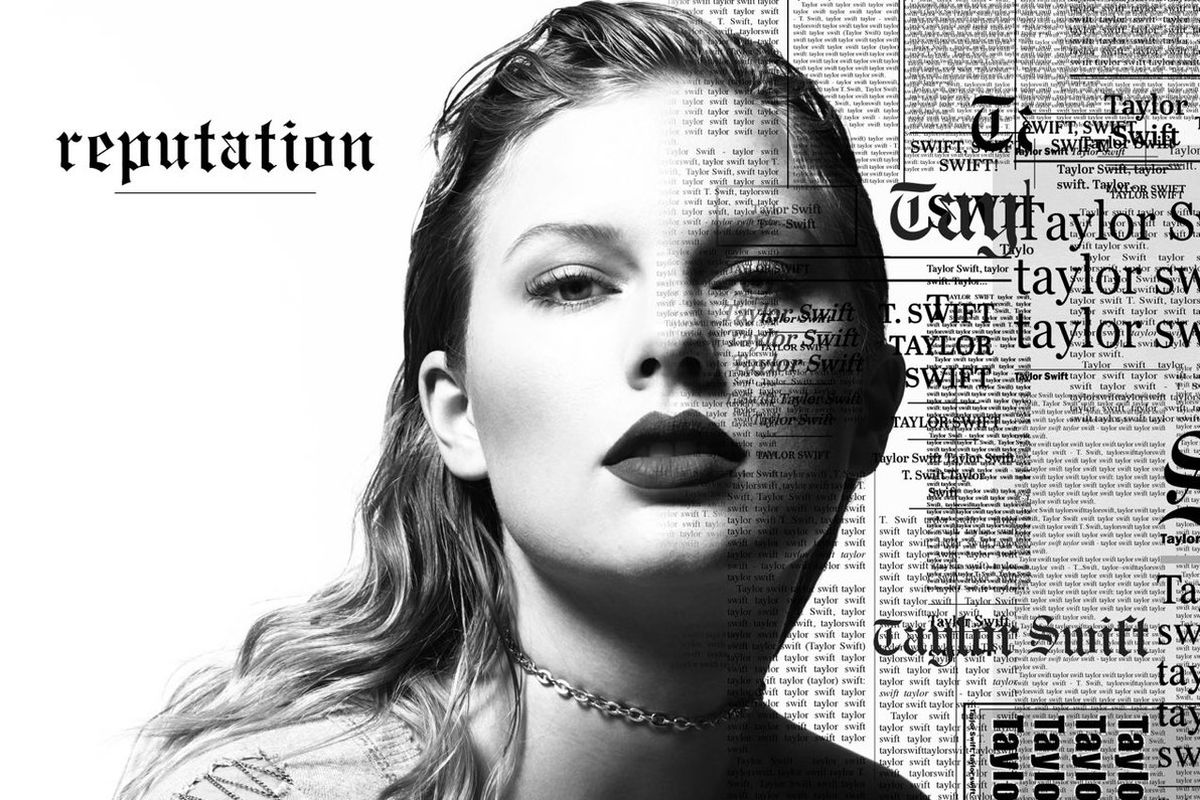