Moonman has released a second pen featuring their new #6 nib. 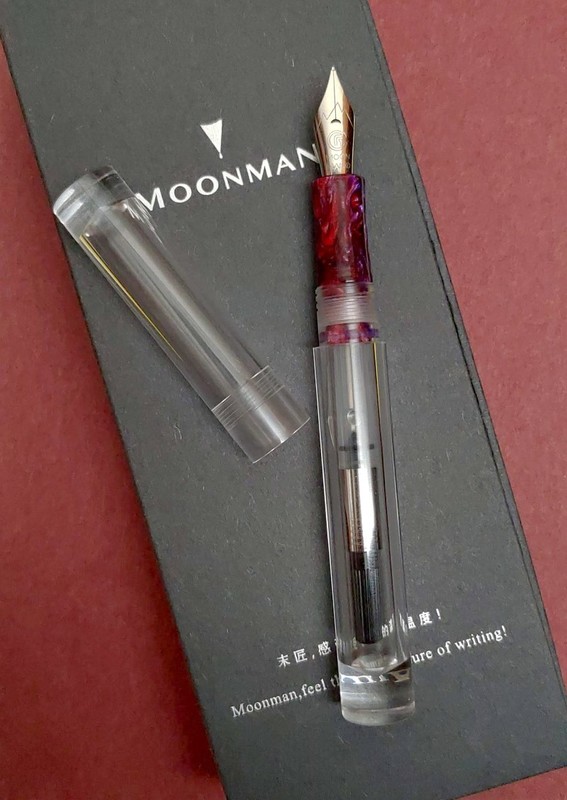 This time it's an acrylic demonstrator that looks to be the successor to the popular Moonman M2.

Aside from a larger nib, the C1 is designed as an eyedropper or a converter filling pen.

It's safe to say, however that at heart, this is an eyedropper filler. Both the nib unit and the section come with o-rings for proper sealing. Then there's the massive reservoir for the ink to slosh about.

But beyond the M2, the Moonman C1 brings to mind another recent pen: the excellent PenBBS 471 pocket eyedropper.

The Moonman C1 is not a pocket pen, so that's a major point of difference, but deployed and ready to write, the Moonman C1 and the PenBBS 471 start to look very similar.

But close your eyes, these pens are kindred spirits.

A splash of color 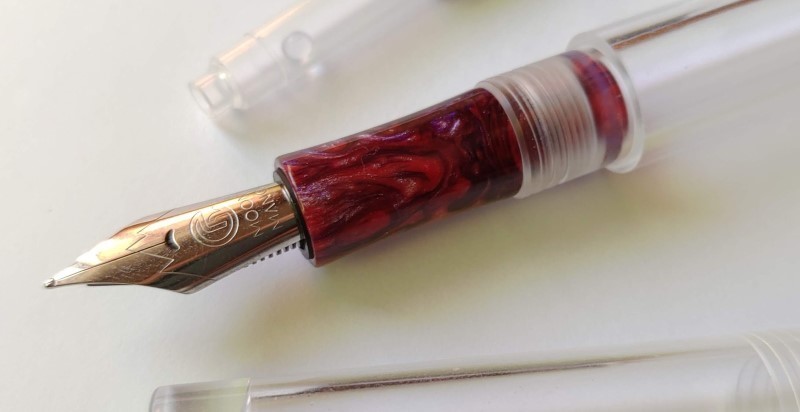 The section is a gorgeous cranberry swirl with purple, red and sparkliness. It looks like a purple version is also be available, but wasn't an option when I ordered. I would have picked this color anyway.

The cap comes off in a shade less than two turns. The cap threads are actually relatively course with no cross threading at all (unlike my Moonman M2 that cross threads all the time).

There's no cap-liner or ledge machined into the cap to mate with the section. Time will tell if the nib has a tendency to dry out.

Overall, the fit and finish of the pen is flawless. It feels well made: light but strong. I like the symmetry of the conical finish on both the cap and the barrel. That reminds me of the opposing ink chambers on the PenBBS 469.

The step on the barrel may be something people find objectionable. It is noticeable and the corner is sharp - as these things go. On the other hand, the step is back quite far so it's still easy to grip the pen to the front or rear of the section comfortably. I am becoming less allergic to steps.

Wait. It's not actually round.

What's not evident at first glance is that there's a flat spot machined down the length of the cap and body of the pen to keep it from rolling around. It's a nice touch, especially since there is not clip. Definitely a cut above the Moonman M2.

The flat on the cap and the body line up perfectly every time. It appears that the threads are design such that you can't get it wrong.

Oh, and the ends of the pen are flat so you can stand it on end if you like - if you've picked up that habit from your PenBBS 471.

Moonman recommends leaving 5-10mm of space when filling the pen. This must be to prevent burping when the pen warms up in your hand.

The Moonman C1 is a comfortably-sized pen with a fairly large diameter barrel. The section is about what you'd expect. The diameter, length and gentle hourglass sweep are almost exactly the same as the PenBBS 469.

I talked about the Moonman 35mm (#6) nib in my reviews of the Moonman M6 and the Kanwrite Desire. Suffice it to say that I think this is one of the best things since sliced bread.

The Moonman C1 wrote perfectly out of the box so my sample size is up to two.

For this pen, I decided on Platinum Violet, an ink I love for the vibrant color - and the amazing price. 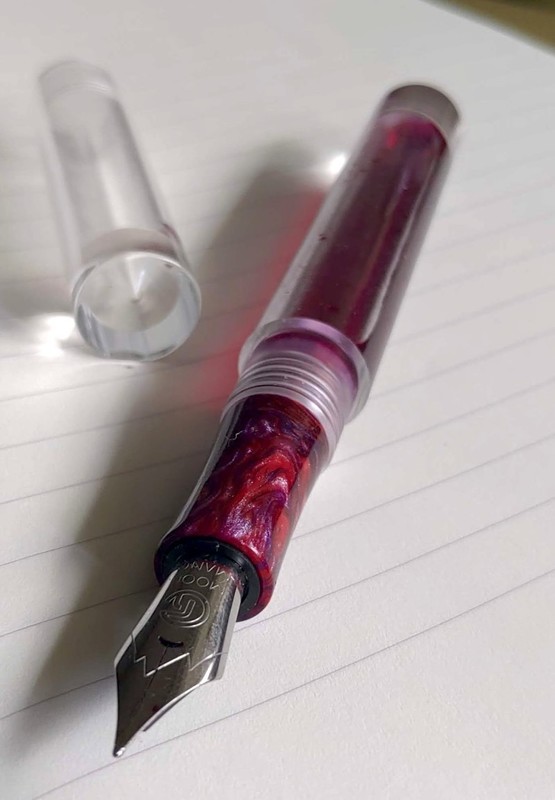 My recent experience with eyedropper pens has been great: Moonman Wancai, Moonman M2, PenBBS 469 and 471 and now the Moonman C1. 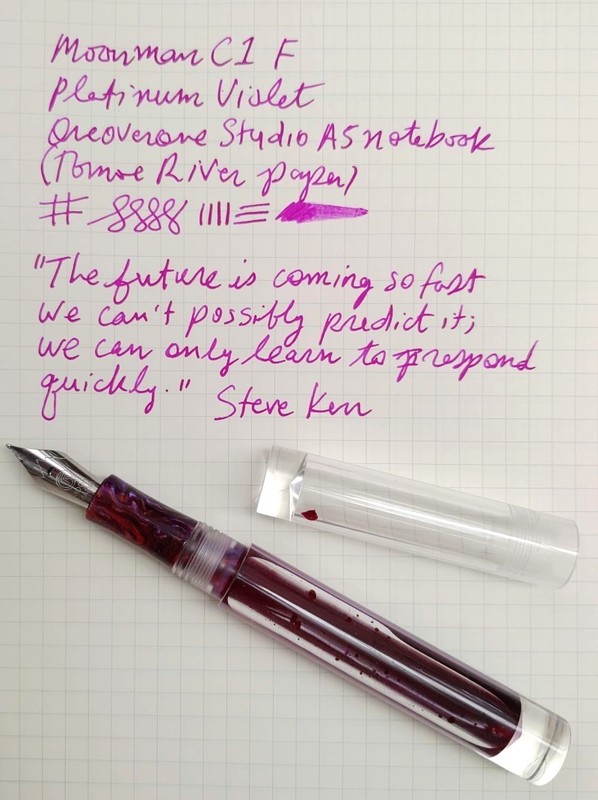 Flow is generous and consistent. The pen is wet but not a gusher. It writes with no pressure at all. The 0.6mm nib (marked F) is at a place between fine and medium that I enjoy.

The pen is well balanced and nimble, suitable for long writing sessions or jotting down notes. It's fun to write with.

The Moonman C1 was just under US$15 plus shipping on Taobao as part of a special launch offer. It's just over US$17 now. On Etsy it is available for around US$20.

If you've never tried an eyedropper, this could be a good place to start.

If there is one thing I'd recommend Moonman work on, it's their English tagline.

Postscript - About that Shinobi

After hitting publish on this article, I discovered this FPN thread talking about a possible successor to the Moonman M2 (i.e., this pen). Among other things, folks noted the striking resemblance between the Moonman C1 and the Shinobi model produced by Shawn Newton at Newton Pens.
The Shinobi story is interesting in itself. The design was originally proposed by one of his customers. And a good idea it was. By 2016, Shawn was reporting that the Shinobi was one of his most popular models.
While the Shinobi is available is a bunch of materials and sizes, the Moonman C1 definitely resembles the transparent acrylic version. No doubt about it.
So there's a brouhaha about whether Moonman is stealing the design. But, then again, it wasn't a Newton design to begin with (although it's clear Newton has evolved the original concept.) To his credit, Newton seems to be taking things in stride. Who knows, maybe he'll be adding o-rings to his future Shinobi models.
All this to say, it's always wise to be an informed consumer. Or reviewer.

Enjoyed reading your Postscript on the Shinobi.  It disappoints me when some fixate on what they see as copying.  They are very selective & subjective in what the see.  A pen is a pen, something to put ink on paper, which the C1 does very well.

Moonman continues to explore new ways to incorporate their #6 nib into new pens. The Moonman C2 pocket pen is easy to like. The pen posts perfectly and feels great in the hand. The #6 nib fits the pen well and performs flawlessly. The C2 is a fun ...

A vintage Aurora 88 has been on my grail list ever since I first encountered pelahale’s landmark video paean to this pen, HeartBreaking Pens of Staggering Genius. Naturally, I set my sights on an original 88 in Nikargenta.
The Aurora 88 is intr...

More to explore
3 Ways to Radically and Naturally Boost Wellbeing

If you’re looking for ways to turbocharge your wellbeing, then you may have to take radical steps. That means changing your daily habits and potentially leaving your comfort zone. Of course, all lifestyle changes must be done with caution. The t... 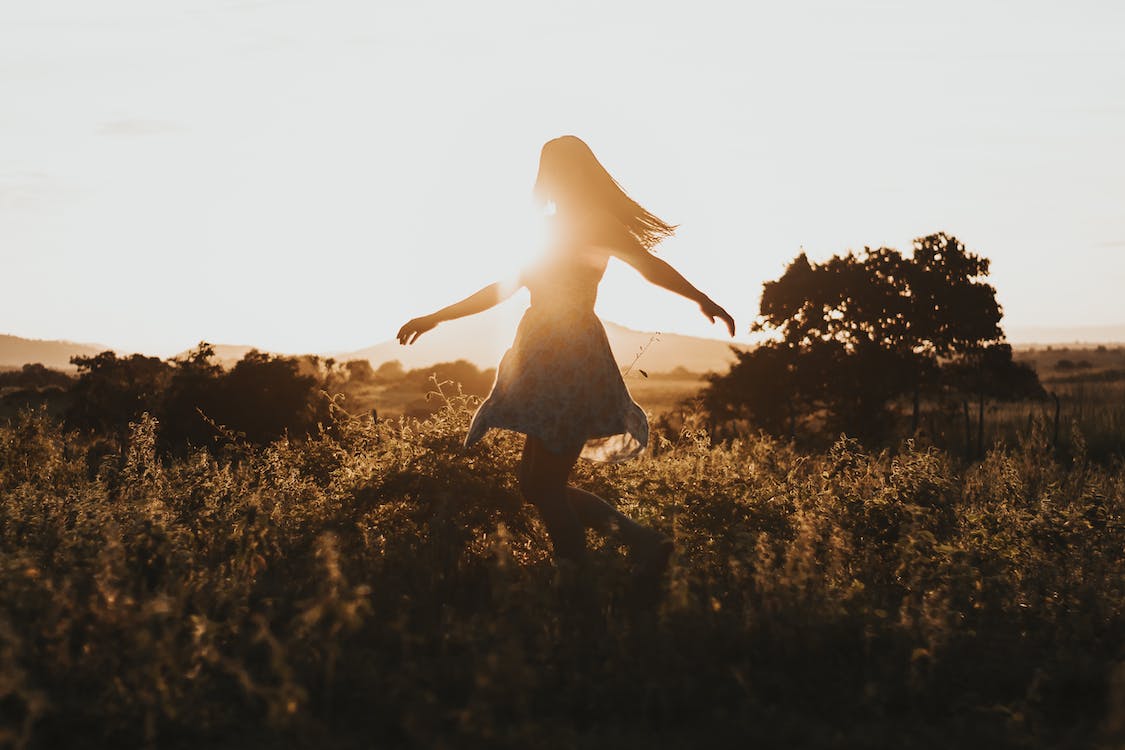 7 ways to make your offer stand out in a compet...

By Kurtis Rhee
I talk to people every day who are wondering just how they’ll get their dream home in competitive markets like San Francisco, Denver, and Seattle. In these areas, sellers don’t just have multiple offers. They have offers from cas... 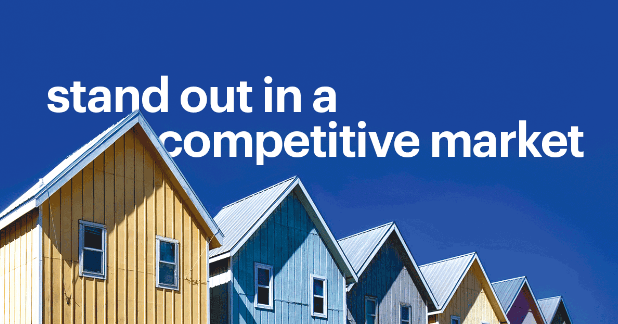