Attention fountain pen lovers. PenBBS is at it again. They've just rolled out another new pen.

The new PenBBS 355 is interesting from a couple of angles: 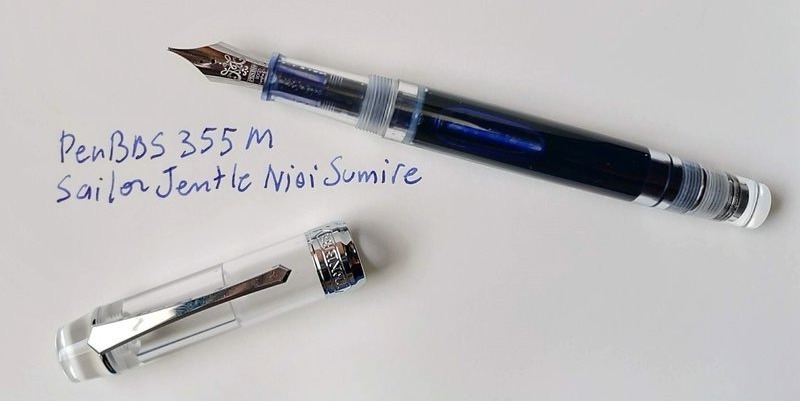 Pen makers have been thinking about ways to make pens hold more ink for a good long time. Makes sense. One of the more ingenious approaches appeared in 1898, in a U.S. Patent issued to one George H. Means.

His invention improved on the piston fillers of his day via a system to disengage the piston from the plunger shaft once the pen is filled to store the shaft in the body. Sweet.

Richard Binder talks more about the mechanism on his blog.

Until now, Conid has been one of the few (only?) pen makers to offer pens using this system. Conid has even patented the mechanism they use to engage the shaft and piston. When the PenBBS 355 was first announced an interesting discussion popped up on Reddit. People wondered if the PenBBS was infringing. Turns out not.

Useful and Cool: a Reservoir Behind the Feed

Like the Conid system, the PenBBS 355 has a ink chamber between the barrel and the feed that seals when the shaft is fully inserted. The chamber stores enough ink to write for quite a while and it's easy to see when starts to get low. A quick twist of the blind cap loosens the stopper and the chamber refills.

The system helps avoid burping and acts as a shut-off valve to keep the pen from leaking for air travel.

For this filling system to work, you have to be able to easily and reliably engage and disengage the piston from the shaft. That Conid patent is making more sense. And there's the rub. With the 355 it's easy to get the two locked together so that getting them disengaged after filling the pen with ink becomes challenging if not impossible.

If you take the plunge with this pen, be prepared to go slow and practice a bit before opening that bottle of ink.

First of all, I'd heard that the pistons in PenBBS 309 piston filling pens sometimes stick in the barrel and require a bit of work to dislodge so they move freely. Yup. The piston was stuck in my pen.

Fortunately, the pen is easy to take apart. You don't get a tool like with TSWBI but it's not hard to find one that works. Once I got the back off the piston assembly, it was simple enough to get the piston unstuck. I applied some silicon grease and put things back together. A little more than finger tight seems like enough. 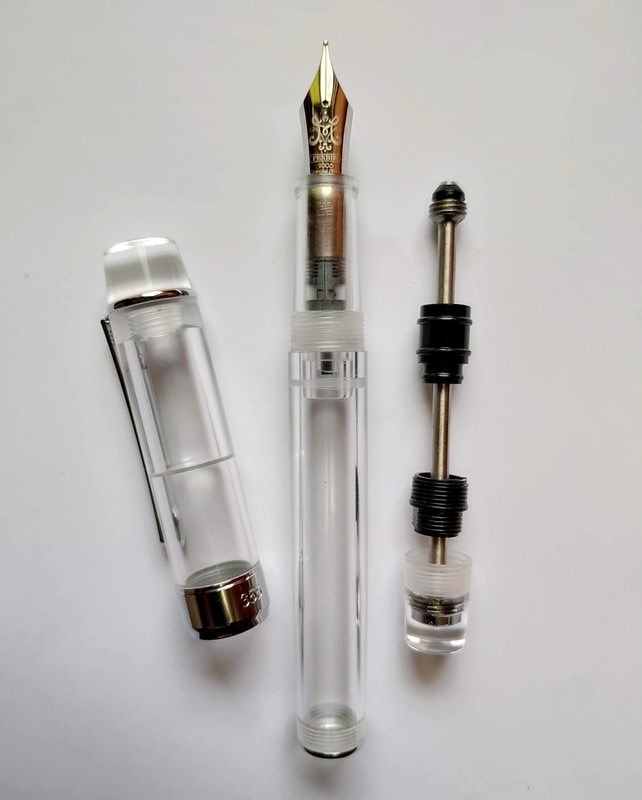 As it turns out, if you seat the head of the shaft snugly into the piston and then fill the pen, the action of drawing ink into the barrel tightens things up. Then there's the issue of the ink. When the pen's empty it's simple to see the threads on the shaft. You can see what's going on. When the pen's full of ink, not so much. In fact, not at all.

So there I was, a barrel full of beautiful Sailor Jentle Nioi Sumire ink and no where to go. The piston and shaft were locked together tight. Turning the shaft turned the piston instead of disengaging the shaft. It got to the point where I wasn't sure if I was even turning things the right direction.

And I now have a nice pair of pants to wear to a future fountain pen meet up. OK, most of the ink did make it back into the bottle but next time I'll keep my ink rag in my lap.

Back to square one.

I took the mechanism apart again, disengaged the shaft and piston and put the pen back together again.

I then got some water and practiced.

The trick it turns out is to not thread the shaft fully into the piston. That and get good enough to do it with your eyes closed.

Not exactly for the faint of heart. And I can imagine that I'll have to relearn the whole thing the next time I go to play with this pen.

The solution was there all along, as helpfully explained by FPN member Driften.

The Fountain Pen NetworkThat is why the piston head clicks and locks into the block in the back of the pen. With it clicked into place it shoundn’t spin when screwing the rod into or out of the piston head. Mine should show up in a few days and should know more then. 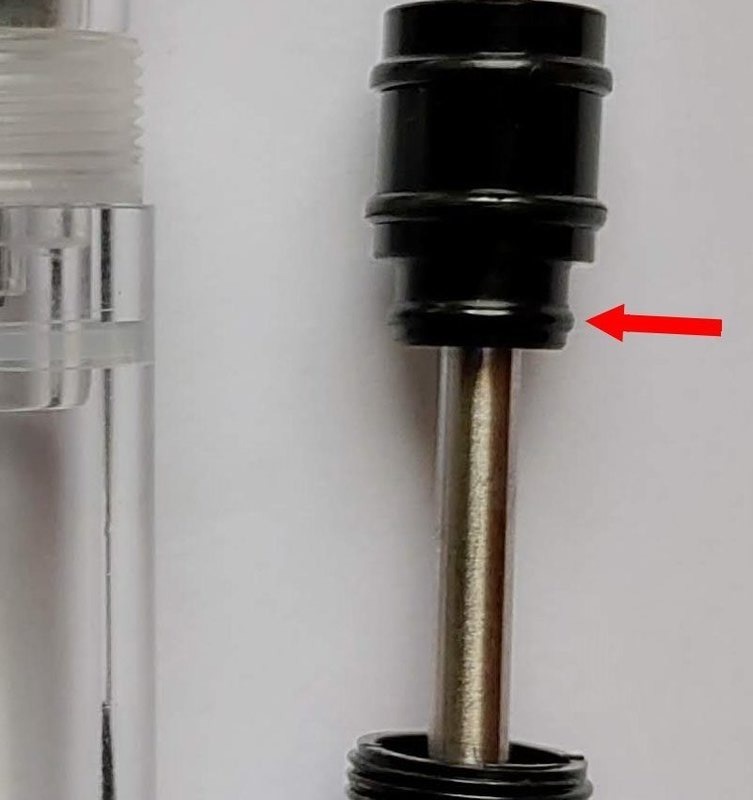 Engage the shaft into the piston and give a firm pull. The piston snaps into place and is held firm. Problem solved! 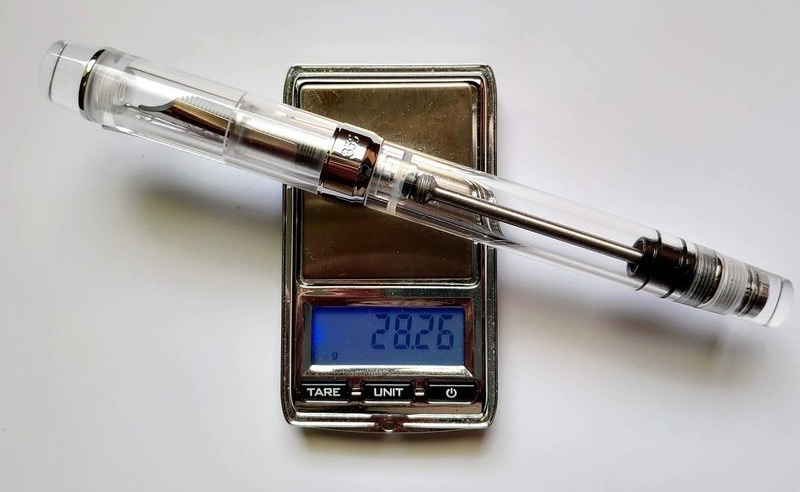 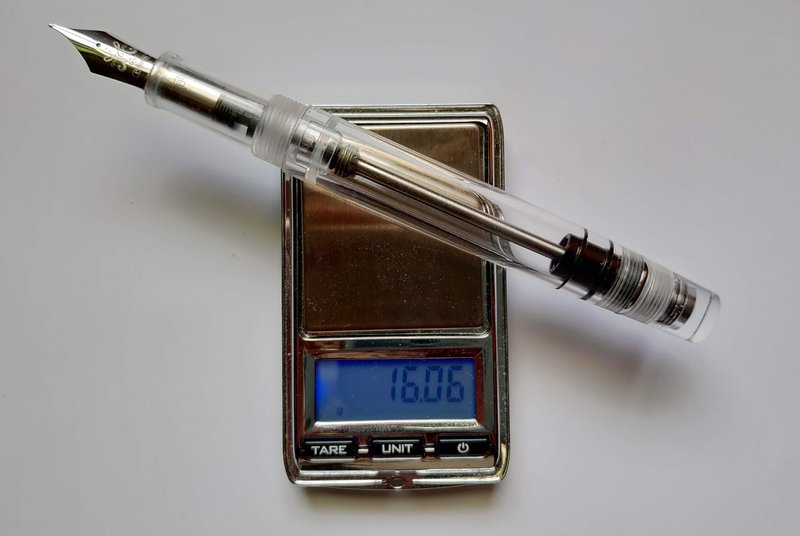 Filled, it is getting toward 20g, my current favorite pen weight. How much is 2.4g of ink? 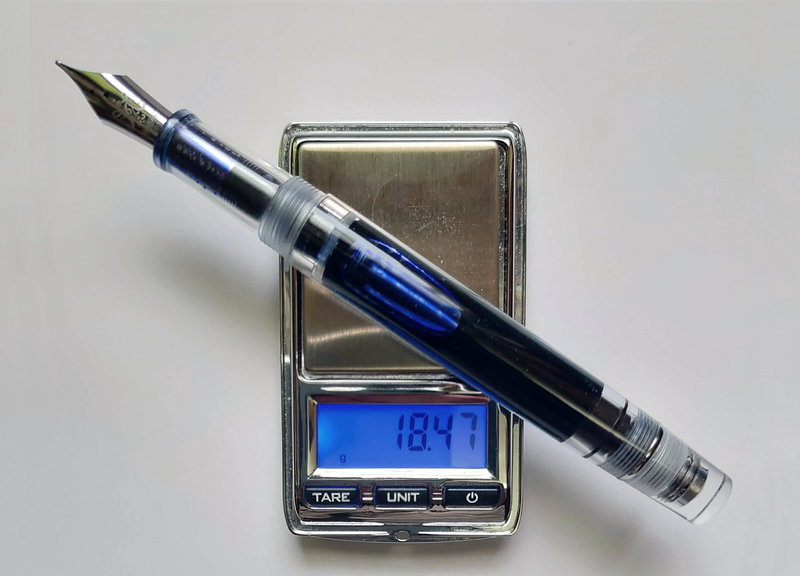 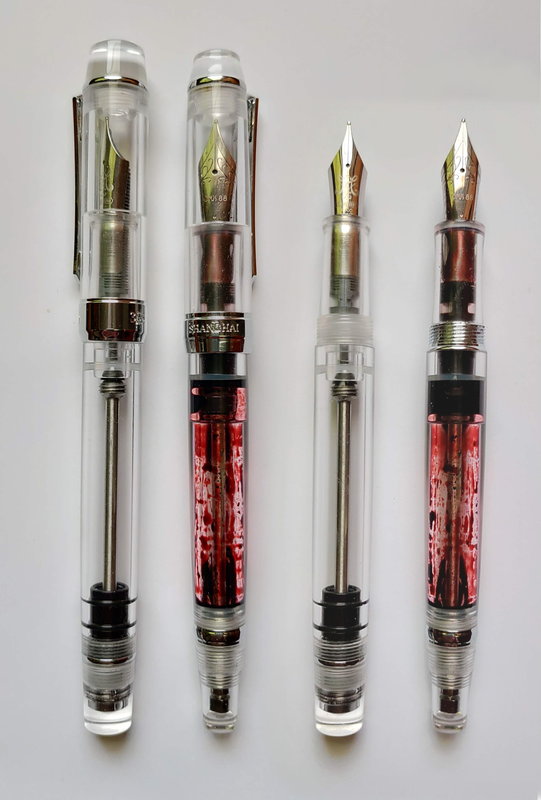 Posted, the 355 is 173mm and quite a bit bigger than the PenBBS 456. The pen posts securely but not overly deep.

The new PenBBS M nib has round tipping compared with the bent tipping PenBBS used on previous nibs.

The new nib is still a bit smaller than a No. 6 nib. The PenBBS M is on the fine side. 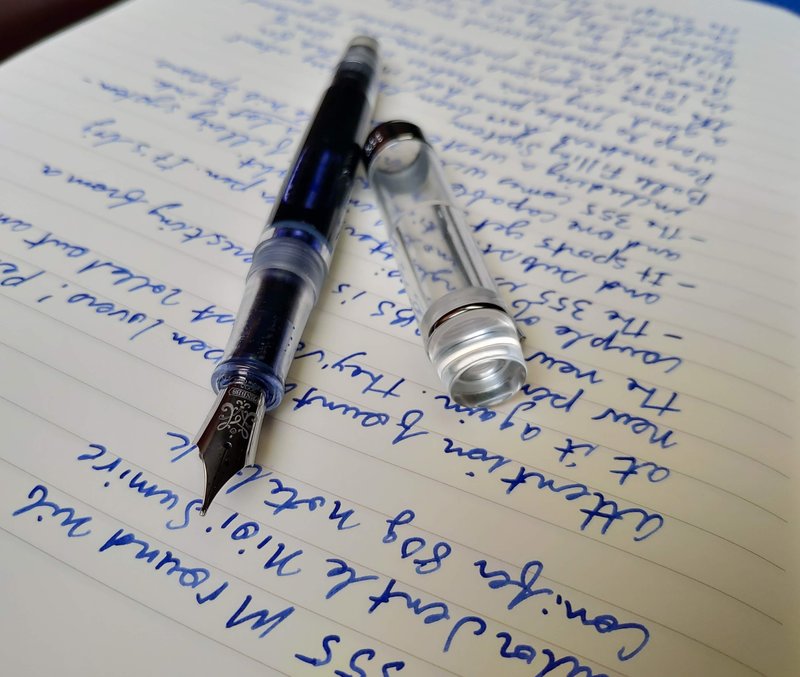 As a writer, the PenBBS 355 more than holds it's own. The M nib wrote perfectly out of the box. No tuning required. It's not as wet or as broad as the Opus 88/JoWo M nib I have in my PenBBS 456, but it's as smooth and is by no means dry. The sweet spot is big and friendly.

In short, the nib performs very, very nicely. Hurray! I've been waiting for more nib choices from PenBBS for a while now.

In the hand, the 355 touches all the right bases. It's plenty big enough to write with unposted. (The cap does post but I can't see why I'd write that way.) I like the weight. Having pretty much settled on 20g as my favorite pen weight, the 355 is within a couple of grams when inked. The section is comfortably large. While the cap threads are on the sharp side, that's not a deal breaker by any means.

Less tapered at the ends, I like the styling of the 355 more than the 456. Obviously PenBBS is famous for amazing acrylics, but I'm a little off that bandwagon. I like the simplicity of a straight transparent demonstrator. PenBBS does a great job. The capliner, for example is clear unlike the smokey liners TSWBI uses.

Style-wise, holding up the 355 next to my TWSBI 580, I think I still prefer the latter. As good as it is, the 355 is a bit plain. The coffinesque clip is kinda meeh. But I'm being picky.

Should You Get One?

Sure. If not just for the nib alone. And to experience the filling system. Once you get that mastered, you'll have a good-to-great writer that holds a ton of ink.  I'm not tempted to swap out the nib on this pen and that's a good thing.

In the pantheon of PenBBS pens, the 355 sits close to the top but isn't head and shoulders over it's mates. I think perhaps I was expecting it to be. Time will tell. It may grow on me.

I paid a bit under US$28 + shipping from Shanghai Jindian on taobao.

For all the folks going for the opaque acrylics this pen will come in, I'd love to hear how you fare with the filling system!

I practiced with my clear Snowflake model & learned how to lock the piston to facilitate screwing & unscrewing.  I prefer the 456, vac-filler easier to master, more metal makes it section heavy.  Posts much better.  Feels better to write with,  I consider the 355 not practical to post. The medium nibs are good but no more so than other Chinese mediums I have used,  I see the clip as sword like.  I agree that PENBBS is amazing in bringing out great new models.  No other pen maker is even close.  I very much prefer PENBBS over TWSBI in all aspects except nib choices but I enjoy nib swapping.  It is a personal choice.  How can you ignore the amazing acrylics PENBBS uses, what has TWSBI done lately.

3
EDC
Join to follow...
Follow/Unfollow Writer: EDC
By following, you’ll receive notifications when this author publishes new articles.
Don't wait! Sign up to follow this writer.
WriterShelf is a privacy-oriented writing platform. Unleash the power of your voice. It's free!
Sign up. Join WriterShelf now! Already a member. Login to WriterShelf.
Mostly pens
1
EDC, on 2019/01/18, said:

I agree with you about the 355 vs 456. The size and balance of the 456 is outstanding - and it does post well. More and more, I'm writing with that pen posted which is a bit unexpected. Style-wise, I still favor the 355. The tapered ends of the 456 aren't my favorite.

But I'm not sure if the comparison is entirely fair as I've never used the 456 with the original nib. I swapped in the Opus 88 (JoWo) M before inking the pen the first time and haven't looked back. When I want the PenBBS bent nib experience, I use my 469.

The filling mechanisms are a big reason I went for traditional demonstrators for the 456 and 355. That and I'm not too keen on the smell I get when uncapping the 469. (I'm a little surprised that hasn't gone away yet.) Still, I did just order a 471 in one of the marquee acrylics so we'll see. I'm curious about the PenBBS round F nib and am looking forward to the chance to check that out.

I treated myself to a TWSBI Precision over the holidays and like it very much. It's an excellent pen. I'm also looking forward to trying out a GO! sometime soon.


More from this author
Moonman M600S - The Duofold Reborn

The Moonman M600S may be the best pen yet with Moonman's new Nº 6 nib. Everything about the Moonman M600S is spot on: size, girth, weight and balance. Clearly, working from the Duofold Centennial dimensions makes for a great pen.

Fuliwen is not a pen brand I'm overly familiar with. It's been covered in Frank Underwater's blog and this particular pen, dubbed the Sceptre, has been reviewed by chrisrap52, WaskiSquirrel and Aaron's Pen Videos on YouTube.
I didn't pay much a...

One of the most preferred frameworks for web application development, Laravel is considered all over the world. This amazing PHP framework covers your project with the best of features and performance. Because of its scalability, Laravel has tur...

Cenforce is a very effective generic drug which used to treat Ed or erectile dysfunction or impotence issues in male.